I made my annual trip to the Western & Southern Tennis tourney this past week.  What a great venue to watch tennis.  I used to go to the US Open in New York every year but decided to change it up about four years ago and headed to Cincinnati…actually Mason, Ohio, and have been going back ever since.  It’s a little closer and an easier drive and while it’s not a Grand Slam, you get to see some pretty good tennis matches. 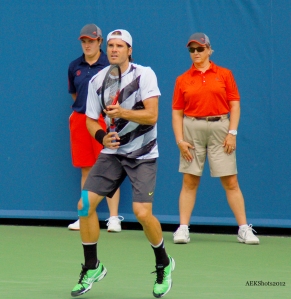 The first match I saw was between Tommy Haas and David Nalbandian  which was a battle to the end with Haas taking it in three sets after losing the first. Great match to start off with…

Next match was another battle on the women’s side between Yanina Wickmayer and Sorana Cirstea.

They too went three sets with Cirstea winning in the third after dropping the first set in a tiebreaker.

Moved over to Court 6 to see Daniela Hantuchova take on Jie Zheng and again what seemed to be the trend for the day. After losing the first set Hantuchova fought back and took the last two sets to move on. 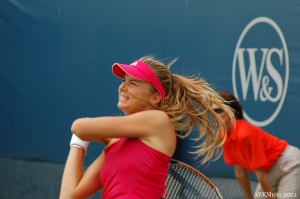 I watched some of Christina McHale’s match against Chanelle Scheepers.  McHale really pounds the ball but I think the heat or something got to her and she could not continue in the third set down 0-3 and had to retire.

On Court 3 an interesting match between Victor Troicki and LLeyton Hewitt.  I was looking forward to this one when I saw it on the draw sheet but it turned into a dud.

Hewitt had no answers for Troicki and the trademark “Cmon”s were few and far between.  I’ve always enjoyed watching him play and he’s had a good career but I’m afraid age has caught up with him.

All in all it was a fun two days watching world class athletes competing up close at a first class facility.  Although, I think two days is about all I can take sitting on those metal bleachers.  I did give in on day two and bought a seat cushion…lol.