Can’t believe it’s that time of year already!  Earlier in the week, I headed out to Latrobe to catch the last day of Steeler training camp that’s open to the public.  It was moved to Latrobe High School I believe because the fields at St. Vincent were beat up from all of the rain we’ve been getting.

The first regular season game is not that far off. 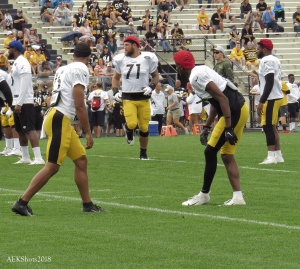 My favorite shot of the team with the old steel plant in the background.